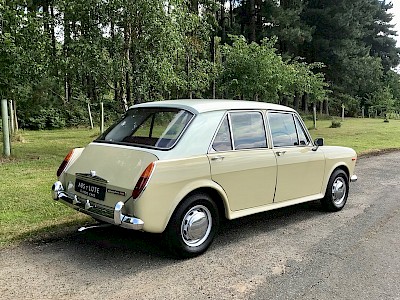 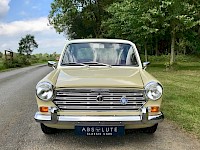 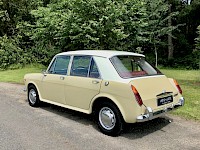 Following his success with the Mini, Sir Alec Issigonis, set out to design a larger, more sophisticated car and with more advanced innovations and so the ADO16 (Amalgamated Drawing Office project number 16) model was created, hardly the most catching title but a design, that non-the-less saw a remarkable 40 different variants being offered by manufacturers such as Austin, MG, Wolseley, Riley, Morris, Vanden Plas and Innocent. Launched in 1962 the ADO16, like the Mini, was designed around the BMC 'A' series engine, again mounted transversely and driving the front wheels. Featuring disc brakes at the front (uncommon on mass-produced cars of the early 1960's) it also featured Hydrolastic suspension, offering passengers a smooth ride akin to the Citroen 2CV, a far less sophisticated car, and with its 'Tardis' like interior the ADO16 offered a comparable interior space to the much larger Ford Cortina.

Originally launched with just the 1100cc version of the 'A' series engine, the popularity of ADO16 was such that it Britains best selling car. This success continued throughout the Mk1's production (1962-67) and on into the launch of the Mk2 in 1967, and with the introduction of the 1275cc engine (similar to that found in the Mini Cooper S and Austin-Healey Sprite) the cars popularity was such that, remarkably at this end of the market, customers actually endured a waiting list! The ADO16's production continued, with minor styling changes, through to 1974, by which time over 2 million units had been sold.

With its accompanying British Motor Industry Heritage Certificate, confirming its May '69 build, we're delighted to offer this wonderful Austin 1300 Super. Sold through the Lookers Dealership, Manchester, she was finished with an Elpaso Beige exterior and Red vinyl interior and its just great that amongst her comprehensive history file (invoices for £5000+, 37 previous MOTs, owners handbook, 'Passport to Service' etc) there is also a period brochure, the content written in a bygone time ........ "Acceleration - Exhilaration - Austin 1300!"

With just 2 previous keepers, this delightful classic has clearly been well loved, the previous keeper owning her for 12yrs alone. During this time the car has had a great deal of time and money lavished on her and the eagle-eyed will have noted that the she now sports a duo-tone paint scheme of Snowberry White over Elpaso Beige, a colour found on certain Riley models. The quality of the paint, chrome (bumpers / over-riders / wheel-trims), glass, lens etc are all in very good condition, its hard to believe she's a 50yr old classic and this Austin 1300 presents fantastically and will gain many admiring glances where ever she travels.

Talking 'occupants' we have to say the interior is a revelation, the amount of space is a remarkable and whilst being pure 60/70's in design (the 'ribbon' speedo will just make you smile), everything works as it should and with the car showing just 39,200 miles (the corresponding MOTs back to 1979 help us to believe the mileage is genuine) its no surprise that the seats, dash, headlining, door cards etc still look superb.

With a great history file and showing a highly credible 39k miles (she will also come with 12month MOT), we don't think many lower price range / stater classics will come much better than this Austin 1300.