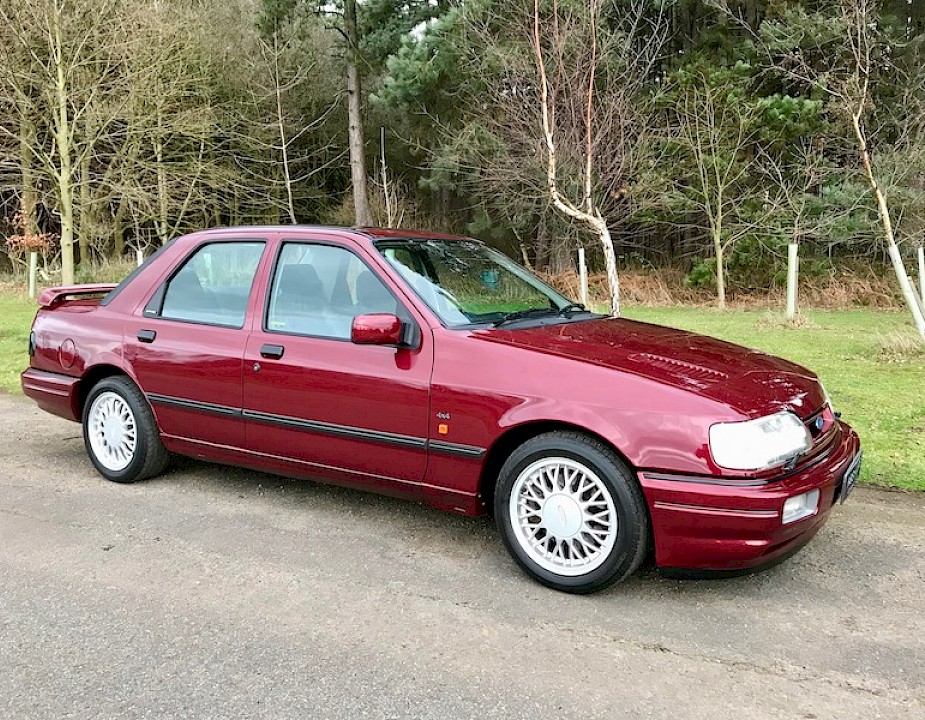 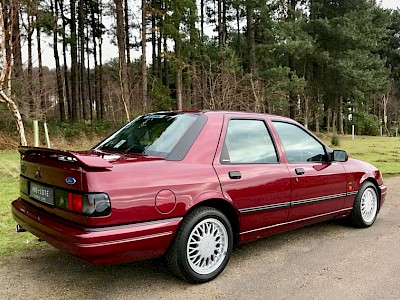 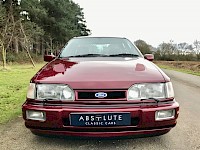 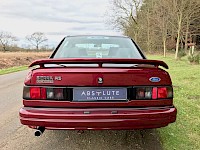 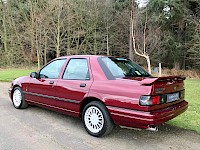 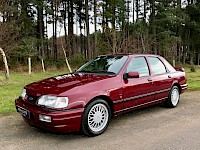 With motorsport successes of the 60's, 70's firmly behind them Ford Europe wished to re-establish itself once again in Motorsport in the early 1980's and approached its partner, Cosworth, in order to gain more power from the T88 'Pinto' block based YAA concept engine. Cosworth obliged but stipulate two conditions; 1. The engine would produce no less than 204bhp and 2. Ford would accept no fewer than 15,000 units......10,000 units more than Ford needed for Group A homologation!

With the required 5000 units built originally in the 'be-winged' 3 door Sierra, the Sierra RS Cosworth was born and Ford set about competing in Group A categories for both rallying, where they struggled for success due to their competitors having developed superior 4wd systems and also on the track where cars had much greater success, especially when developed into the all conquering RS500 where the car won multiple world-wide championships, outright wins at the Bathhurst 1000 in 1988/89 and incredible 40 successive wins in BTCC!

After these successes Ford felt that they needed a car with greater market potential, offering the same power, but with the greater comfort and the ability to carry the family too and thus they created the 2 wheel drive 4 door Sapphire Cosworth and in January 1990 Ford announced the third generation, the Sierra Sapphire RS Cosworth 4x4, this time with four wheel drive and a choice of Catalyst and Non-Catalyst engines, the red-topped YBJ for non-catalyst cars and those with green rocker covers, featuring the environmentally friendly (tongue firmly in cheek) 220 bhp YBG engine.

By the end of production in late 1992 the Ford Sierra Sapphire RS Cosworth 4X4 was phased out with Ford introducing the new Mondeo, however rather than developing a new performance Mondeo, the company focused on development to the Escort Cosworth.

Walking around this 28,800 mile example its clear to see that this Cosworth has been cherished. The bodywork is in fantastic condition she has a deep lustrous shine and only on very close inspection will you find a few age/storage related marks (we're being hyper-critical). Panel gaps are consistent all around the car and all the lenses, clear front indicator / smoked rear lense correct to facelift 4x4 models are scratch and fade free, the colour-coded rear spoiler, correct without the black lip for the very last 4x4's, is perfect and it's great to see that the Sierra Sapphire RS Cosworth 4x4 re-gained the bonnet vents found on the early 3 door cars. Her factory fitted 15x7 inch Sierra Sapphire RS Cosworth 'Shark Tooth' alloys wear a matched set of new Continental tyres. and having looked we don't think the spare has ever been out of the boot! Correct in every detail we were equally impressed by the underside of the car, factory Motorcraft stickers still adorn many of the suspension components and for the purest delight, she still has her factory exhaust system!

Stepping inside the car, the first thought is .. 'Time Warp'! Commensurate with the super low mileage, the optional Sapphire RS Cosworth 4x4 Raven leather interior is preserved to the highest level, in fact on opening the door the new owner will still be meet by that 'new car' smell. The 'Recaro' embossed seats look spectacular and are free from any wear and naturally the same can also be said with the condition of the carpets (over-mats fitted), door cards, dash and associated switch-gear. The car comes fitted with a Vecta alarm system (fitted whilst undergoing PDI), telltale LED flashes on the dash, is fitted with a period Sony XR-7040 stereo and CDX-70 6 disc auto-changer and comes with the factory optional electric sunroof. A truly special place to be, the interior of this RS oozes class and sporting intent in equal measure.

Mechanically having averaged just over 1000 miles per year this Sierra Sapphire RS Cosworth 4x4 is simply spectacular! On opening the bonnet you're meet with a concours quality engine bay, correct in ever detail. The 1993cc DOHC turbocharged engine fires instantly, the green cam cover denoting that this car features the YBG engine introduced in February '92 and fitted with a catalytic converter / lambda sensors in order that the engine could meet tighter US emission controls. Don't let the thought of being 'eco-friendly' concern you however as when up to temperature the 220bhp engine will still propel the occupants to close to 150mph....where allowed! Driving the car is a real delight, the 5 speed MT75 transmission remains positive and the drive-train feels super tight, further testament to the low mileage.

A review of this Cosworth's history confirms that this car really has led a sheltered life. MOT history, 14 in total going back to 1997 (she was laid-up for a 7yr period) confirm that the car did in fact do the majority of its driving between '92 and '99 and she has only done 3k miles in the last 20 yrs! The box file includes her original dealer pack contains all handbooks, Tax discs, sorn declarations, MOT emission results,  she comes with 2 keys, clear HPI report, a multitude of invoices and her service book shows that she has been serviced 6 times, most recently in April 2019 with the invoice indinciating an oil service (Motorcraft Oil filter) replacement brakes, new tyres and a complete new OE exhaust system and that along with a major service in 2017, only 200 miles ago , where all fluids have been changed - engine, gearbox, differential, transfer box, brake, plus coolant, other service items and an obligatory cambelt change, there's real peace of mind that this classic Cosworth should provide miles and miles of trouble free motoring. With its motorsport pedigree, remarkably low mileage, fantastic original specification and with her supporting history file this Sierra Sapphire RS Cosworth 4x4, one of the last 200 built, is the true collectors car in ever sense and now ready to be cosseted and enjoyed by her new owner.