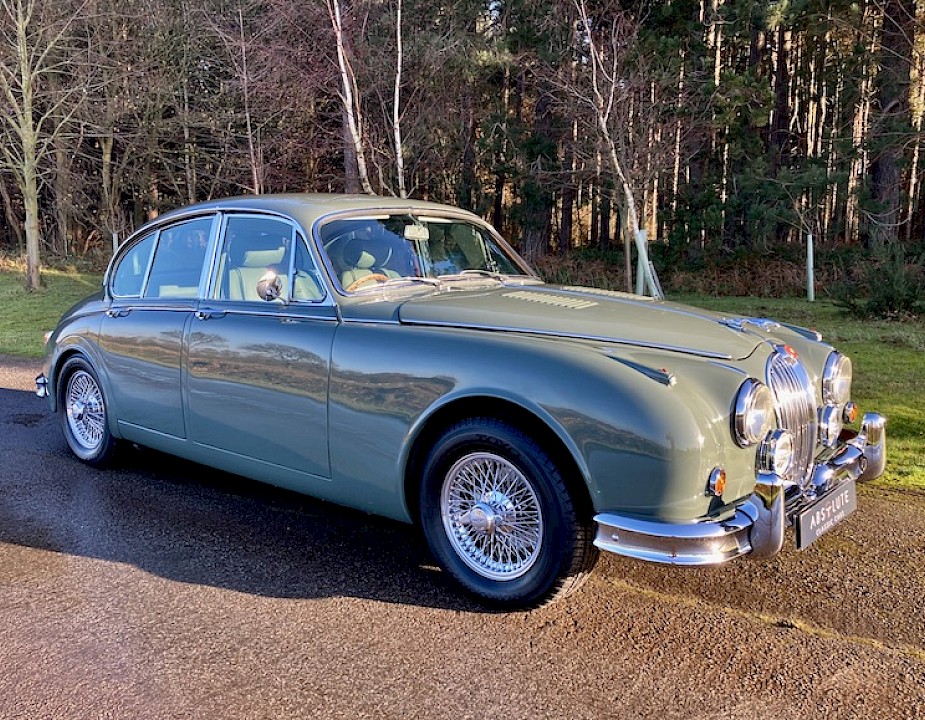 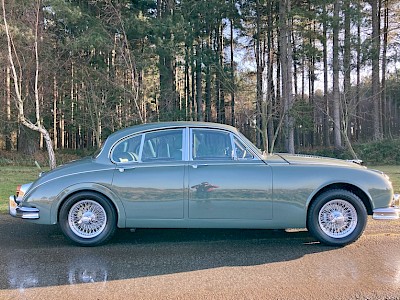 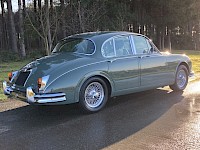 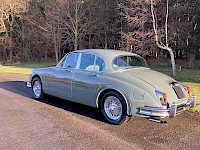 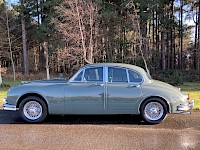 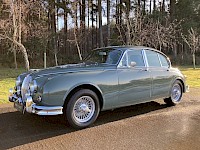 The Jaguar Mark II saloon (also referred to as the Jaguar Mk 2), introduced in 1959, was an elegant update of the company’s first small unibody saloon, the Jaguar 2.4 and 3.4 litre saloon models, built 1955-59 (which retrospectively became known as the Mark I (Mk1). Essentially re-engineered above the waistline, with slender front pillars allowing for a wider windscreen, the rear window almost wrapped around to the enlarged side windows, the now familiar Jaguar D-shape above the back door and featured fully chromed frames for all the side windows, the result of which increased the cabin glass area by 18% offering much better viability. Additional external changes saw a new radiator grille, the rear lighting arrangements were changed, the rear wheel spats made smaller (due to a wider rear track) and cars now featured front fog lights too. Internally the Mk II saw a number of improvements; a new heating system was fitted with ducting to the rear compartment, there was improved instrumentation too with major dials positioned in front of the driver, a row of toggle switches to the centre, lashings of leather, walnut and a pair of rear picnic tables for those traveling in style in the rear.

Mechanically the Mk II continued to use the  DOHC aluminium 6-cylinder engine as found in the Mk I, these being a derivative of the XK engine, which could be found in the wonderfully stylish XK 120/140/150 series cars, E-types etc and with displacements of 2.4, 3.4 and 3.8 litres the model range would offer drivers a variety of power units ranging from 120-210bhp respectively. Transmission was usually a 4-speed with optional overdrive or 3 speed Borg-Warner automatics and all cars came fitted with disc brakes all round, optional Limited Slip Differentials on 3.8 litre models and the option of wire wheels. The model was slowly phased between 1967-69 as the renamed and lower spec'd 240 and 340 models and by the end of production a total of ~91,000 units had been sold worldwide.

Built on the 10th May 1961, this spectacular Jaguar Mk2 3.4 was originally dispatched to the Henlys Limited, London on 31st May '61 as the original distributor and then supplied new by Frank Bells Garage on the 1st June 1961 to the original keeper, Mr H W Savage of Sawbridgeworth, Hertfordshire.  Finished originally in Opalescent Grey with Dark Blue leather this matching numbers, 3.4 litre with manual overdrive gearbox example (as confirmed by a Jaguar Heritage Trust Certificate) remained in largely original condition until circa 2011 when purchased by her long term owner, Mr Steeley, for the cost of £20k and showing just 49k miles. At this point and with a desire to build, a truly bespoke / upgraded / 'better than new' example Mr Steeley entrusted the Jaguar Mk2 to the independent Jaguar Specialist WatJag Ltd who set about transforming the car to the beauty you see today.

With some 1100hrs in a complete strip down, bare metal restoration and costs exceeding £85k+ there are few words that can describe how utterly gorgeous this car is. Finished in, her period correct, Sherwood Green the car looks breath-taking; panel gaps are excellent throughout (probably better than when new), there are new rubbers fitted throughout, new light lenses etc, the brightwork has been re-chromed at huge cost and the 'Crosby' designed 'leaping Jaguar' bonnet mascot acts as an indicator that this car has 'intent' with this being accentuated further as the eagle-eyed will have also have spotted the subtle upgrades to the bodywork including Coombs rear arch spats and hand-pressed bonnet louvers.

The attention to detail continues when stepping inside. Entrusting the interior to 'The Trim Centre', their level of detail in the restoration of classic Jaguars, Aston Martins, Mercedes etc interiors is simply breath-taking and this is exemplified in the interior of our Mk2. The original front seats have been upgraded to those from a modern Jaguar XJ, beautiful sculpted to support both driver and front passenger, the rears trimmed to match, along with the door cards and centre console with carpets finished in grey to compliment throughout and there's also inertia front seatbelts and safety belts for rear passengers too. The dash and door cappings throughout have been lovingly restored and with up to 20 coats of lacquer, so the wood grain really shines through and finishing off the interior there's a wood-rimmed Motolita 3 spoke steering wheel and alloy gear-knob ....... not original we know, but it's another clue of more to come!

Mechanically the car has wanted for nothing! The owner, who oversaw the restoration wished to created a car that not only offered all the grace that Sir Williams Lyons captured in his period advertising but now had pace and ability to keep abreast with modern motoring and we believe the works undertaken have really created and captured what is akin to the classic Grand Tourer, with works including:

Needless to say and with just 1000 miles completed since her rebuild this Mk2 is a wonder and delight. The wonderful 3.4 litre straight six engine fires with ease and a bark, and settles into lovely idle, exhaust notes burbling nicely through the stainless exhaust system. We always allow her a few minutes to warm through before beginning each journey; time enough to find the perfect driving position and long enough for the anticipation to build. With the electronic 'choke' now off and selecting 1st gear, the Mk2 pulls away cleanly with the steering having a little weight at low speed, more in part to the wider, low profile tyres. Once out on the main roads this classic Grand Tourer really begins to shine. The Borg Warner T5 gearbox upgrade has an almost rifle-like action, slick and precise, the steering and suspension perfectly balance, with little body roll in the corners and with the 'Fast Road' specification 3.4 litre producing in excess of the factory 220 bhp the driver can truly enjoy this Grand Tourers superb driving characteristics.

We could wax-lyrical all day about this Jaguar Mk2 3.4 litre, but with her detailed photographic 1000+ hours restoration and works in excess of £85,000 its suffice to say that she is without doubt the finest Mk2 we've ever seen and would look resplendent in any collection and is ready to be enjoyed for many years to come.