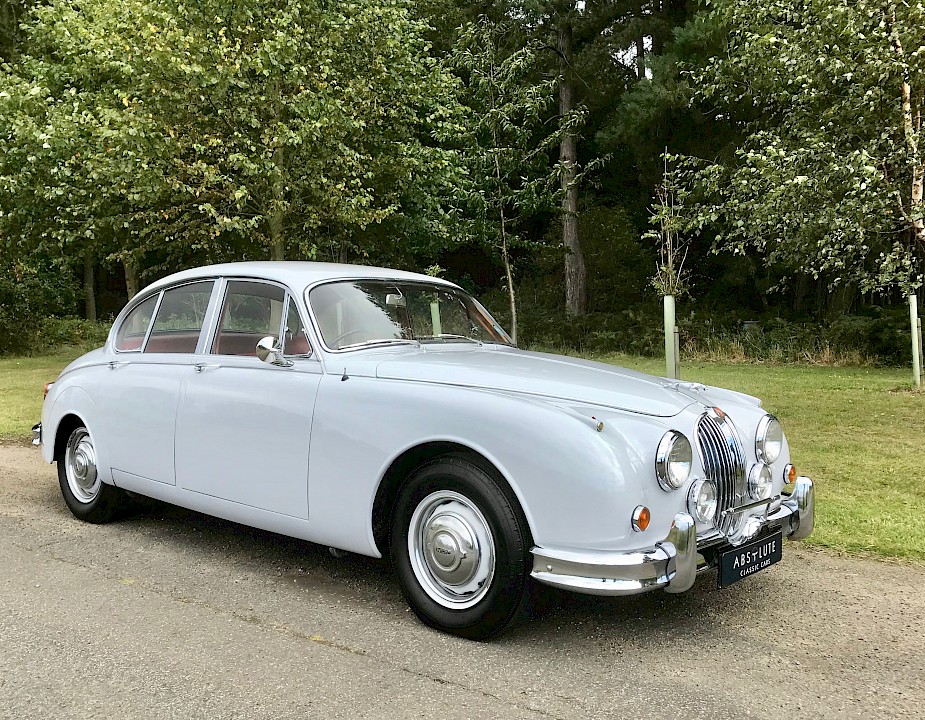 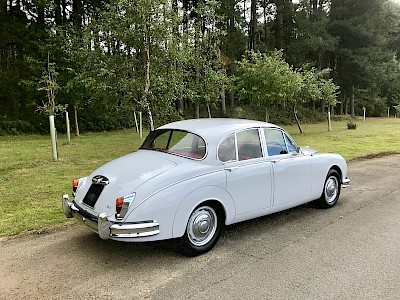 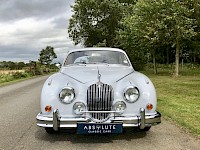 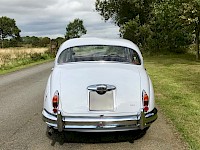 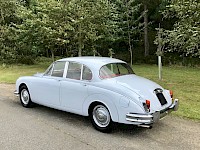 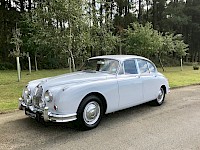 The Jaguar Mark II saloon (also referred to as the Jaguar Mk 2), introduced in 1959, was an elegant update of the company’s first small unibody saloon, the Jaguar 2.4 and 3.4 litre saloon models, built 1955-59 (which retrospectively became known as the Mark I (Mk1). Essentially re-engineered above the waistline, with slender front pillars allowing for a wider windscreen, the rear window almost wrapped around to the enlarged side windows, the now familiar Jaguar D-shape above the back door and featured fully chromed frames for all the side windows, the result of which increased the cabin glass area by 18% offering much better viability. Additional external changes saw a new radiator grille, the rear lighting arrangements were changed, the rear wheel spats made smaller (due to a wider rear track) and cars now featured front fog lights too. Internally the Mk II saw a number of improvements; a new heating system was fitted with ducting to the rear compartment, there was improved instrumentation too with major dials positioned in front of the driver, a row of toggle switches to the centre, lashings of leather, walnut and a pair of rear picnic tables for those traveling in style in the rear.

Mechanically the Mk II continued to use the  DOHC aluminium 6-cylinder engine as found in the Mk I, these being a derivative of the XK engine, which could be found in the wonderfully stylish XK 120/140/150 series cars, E-types etc and with displacements of 2.4, 3.4 and 3.8 litres the model range would offer drivers a variety of power units ranging from 120-210bhp respectively. Transmission was usually a 4-speed with optional overdrive or 3 speed Borg-Warner automatics and all cars came fitted with disc brakes all round, optional Limited Slip Differentials on 3.8 litre models and the option of wire wheels. The model was slowly phased between 1967-69 as the renamed and lower spec'd 240 and 340 models and by the end of production a total of ~91,000 units had been sold worldwide.

Originally sold to a garage proprietor on the 19th August 1960 and remaining in his ownership for an incredible 44 years, Absolute Classic Cars are delighted to offer this glorious Jaguar Mk II. Finished in her original Pearl Grey with Red leather interior the car features the 2.4 litre DOHC engine, comes with the optional manual overdrive (MOD) gearbox and shows an amazing, warranted 35700 miles from new!

A visual inspection of this 59 year old classic will leave most people speechless! The bodywork remains in fantastic condition, she has a deep lustrous shine and feels like silk to the touch! The chrome work looks wonderful too, no nasty pitting, just beautifully detailed and what impresses us most is how fantastic all the panel gaps are around the car. The coach lines are super crisp, every door opens and closes with the gentlest of touches and its' truly evident that this Mk II has been treated with real care. Fitted with her original 15" steel rims, the car comes with, original equipment, Dunlop Road Speed tyres all showing 5mm+ tread and on opening the boot you'll find her original jack, spanner and tool kit....which we believe is used!

Stepping inside the car, the first thought is .. 'Quality' and despite being over 1/2 a century old the seats, wooden dash / door cappings, switch gear all ooze it...... these early Mk II Jaguars were built at a time before the 'bean-counter' accountants had their say! This Mk II just feels special, the seats remain supple, yet supportive, the red leather remains in excellent condition, its smells sensational and whether driver, passenger or company Managing Director, travelling in the rear, the Jaguar Mk II interior can only be surpassed by those manufacturers selling cars at 5 times the price.......in 1960 a Jaguar Mk II 2.4 MOD cost £1533 19/- 2d .

Used sparingly for the first 18 yrs the Mk II was put into storage in 1978 (at ~30k miles) after the original owner passed away, the engine run up to temperature occasionally and its not until 2005 when the car was recommissioned by the family again that she finally started being used on the open road. Now some 14 yrs later the car has only done a further 4k miles and to drive her is a real delight. The 2.4 litre engine is whisper quiet and when sat at idle one could be hard pushed to tell if the car is running. Out on the main roads the car performs well, the brakes are excellent thanks disc brakes all-round, the suspension offers travel with an air of grace and one can't help but feel special enjoying a drive in one of Jaguars finest.

In recent years we've spent a great deal of time trying to find the right Mk II or Daimler V8 to bring into the portfolio, this is the first that ticks all our boxes. A wonderfully genuine example in first class condition, with a great history file (every part of the original dealer presentation wallet is present) and having come from long term ownership too. Whilst some may lust for the 3.8 litre (the ultimate 'get-away car') those in the know, (Inspector Morse drove a 2.4 litre too), will agree with that Sir Williams Lyons maxim, "grace, pace and space", fits the Mk II perfectly and once seen, you too will fall in love with this beautiful, luxurious and capable saloon.