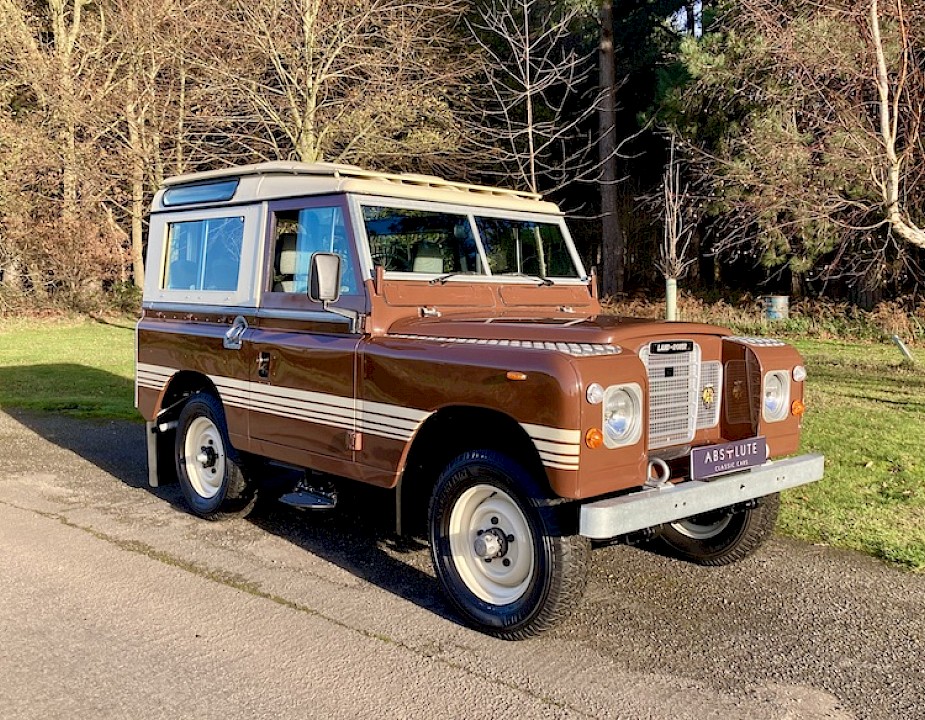 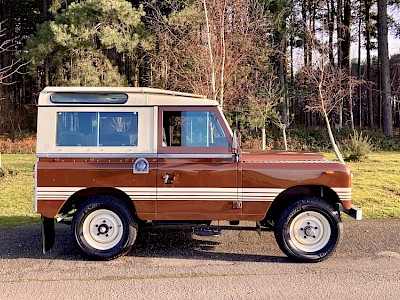 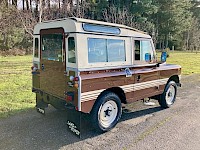 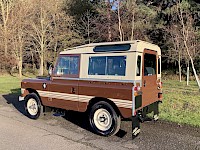 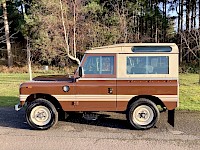 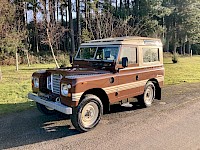 Originally an idea drawn in the sand on the beach near his home in Anglesey, North Wales, the Maurice Wilks designed Land Rover first went into production in 1948 as the Series I Land Rover. This basic utilitarian 'workhorse' remained in production until 1958; the Series II and IIA until 1971 and then in October '71 Land Rover introduced the Series III.

When the Series III replaced its Series II / IIA counterpart in Oct 1971 little was changed with respect to chassis, wheelbase dimensions and body styles, however the introduction of an all new fully synchronised gearbox and revised ratios on 1st gear and reverse gear helped to improve the drivability. With subtle styling changes, moving the headlights onto the front wings, a new grill and improved interior heating, the Series III remained in production until 1985 when it was finally phased out and replaced by the updated and modernised Defender.

Registered in June 1982 this Series III 88" County Station Wagon is a remarkable rare example being one of ten pre-sales vehicles that was used by Land Rover for 'Press' purposes; offering on and off road driving in the grounds of Blenheim Palace, static displays and also used also to create the original sales leaflet, "Land Rover County" you see within the accompanying history file. Being one of the launch cars, she naturally comes with a great specification:

A review of the images confirms that this Land Rover County Station Wagon is in outstanding condition and a review of the history file shows that she has wanted for nothing in her painstaking restoration with works including:

Body - all panels inspected for any damage and where necessary remedial repairs carried out, new panels supplied (including a new bulkhead) and the body built back up with fastidious detail where even all the  rivets following the factory lines! Once built as a 'tub', the whole vehicle has been professional finished in her original Limestone over Russet Brown. The quality of the body-work finish is exemplary, the panel fit is perfect, you're unlikely to come across another Landy whose doors shut with ease, rather than a slame! The attention to detail extends further into the engine compartment, underbody, inner panels, etc.

Interior / Glass / Rubbers / Fittings - Simply put everything is as 'new'. The seats / frames have been stripped, frames painted, new foam and new set of "County" seat covers fitted, with the same applying to the four rear seats. All the switch gear has either been refurbished or replaced, new seatbelts fitted, all new galvanised / zinc fittings throughout the vehicle, all new door / window rubbers, new glass as needed, new mats, new mud-flaps, new gear knobs (gearbox + high/low ratios), headlining full retrimmed, the Safari vents all fully refurbished. The only 'original' looking item is the steering wheel and we plan to restore this too ahead of sale, should the new owner wish.

Drive Train / Axles / Fuel system / Wheels / Tyres - Again everything fully striped and checked and in as 'new' condition. The engine is one of the last factory reconditioned 5 bearing units, the starter motor, alternator, radiator, all hoses, new heater box, new brake master cylinder, clutch / clutch master cylinder have been fitted as new. Gearboxes, differentials, overdrive, propshafts have all been stripped, checked for any wear and replaced where necessary. The fuel system has all been replaced - a new fuel tank, filler neck have all been replaced, new glass fuel-filter bowl and a new carburetor fitted and to ensure the gases leave the car as they should an all new exhaust system has also been fitted. The braking system has been completely rebuilt with new parts and to top it all the car has a set of fully refurbished wheels (painted in their correct Limestone) and fitted with Michelin 205/80/16 Latitude tyres.

Since completion the Land Rover has done less than 500 miles and as such we're treating her as a new car. She starts on the button, drives without fault, in fact she drives better than any Land Rover we've driven, comes with a full MOT and prior to delivery / collection she'll also receive a 'running-in' service / inspection.

The 'Land Rover' or 'Landy' is to many, the ultimate go anywhere, rugged utilitarian vehicle and with this fantastic capability it is no surprise that the Land Rover has stayed in production for over 60yrs, we can't see any modern counter-part lasting that long! Rare and fully restored this 88" County Station Wagon is a true classic and whether your at a show, a shoot, the pub or even on the school run (remember, she's got six seats) one thing is for sure, she's uber cool ..... in fact, as Top Gear might say she's 'Sub Zero!'