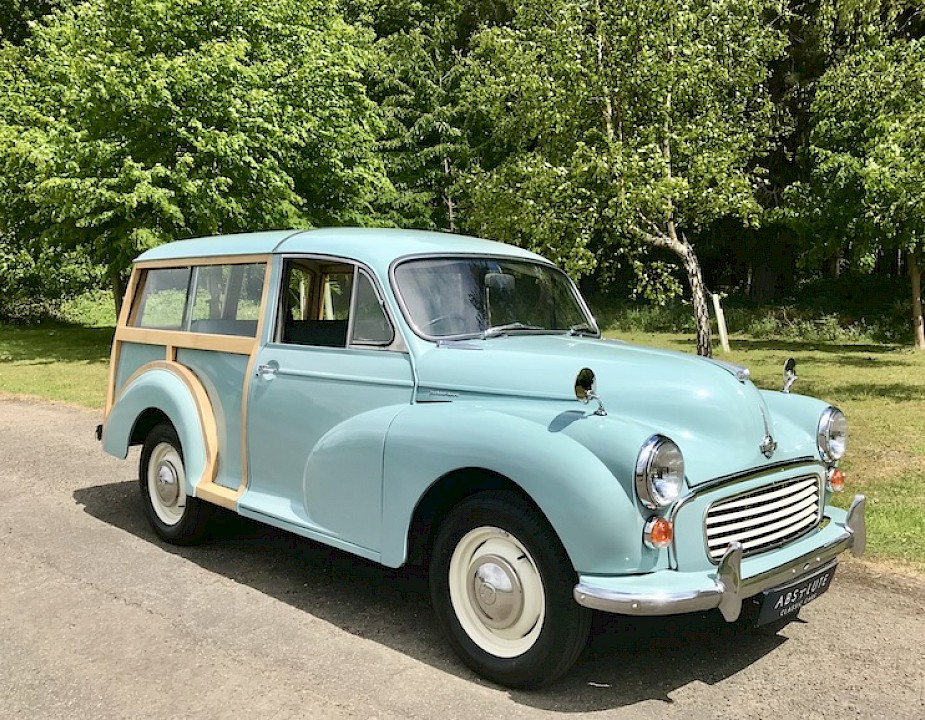 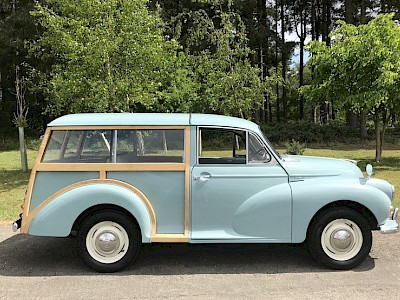 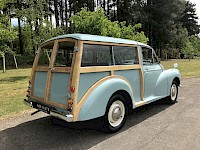 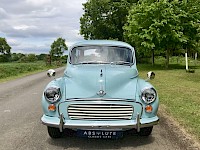 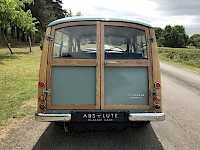 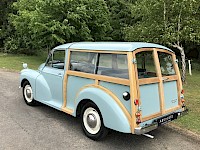 Designed under the eagle eye of Sir Alex Issigonis, most famous for the BMC Mini, the Morris Minor first made its appearance at the 1948 Earls Court Motor Show. Initially available as a two-door saloon and tourer / convertible, the Minor (built between 1948 and 1972) saw development during 3 phases in the cars life: the MM ('48-53) with it's low-lights, split-screen front window and side valve engine; the series II ('52-56) saw the introduction of the 'A' series engine and in '52 the estate or Traveller version was introduced with its external wooden (Ash) structured body being fitted to the front (saloon body) at the MG plant in Abingdon as the Morris Cowley plant could no longer cater for body-on-frame built vehicles. In 1956 the Minor 1000 was introduced, the two-piece front screen now being replaced by a curved one-piece windscreen, an increase in engine capacity to 948cc, the original semaphore indicators now being changed for the more modern front / rear flasher units and in 1962, although retaining the Minor 1000 name, the car saw some of its biggest changes with an improved 1098cc 'A' series engine, improved braking / gearbox and improved interior styling.

By 1969 with sales declining, production of the tourer / convertible model ended, the saloon being discontinued in 1970 and by the end of 1972 and with some 1.3 million Minors sold, including the Traveller, van and pick-up models production of the Morris Minor finally ceased with the car officially being replaced by the Morris Marina, although many feel the spiritual successor was the similarly family sized Austin / Morris 1100 model.

Sold new in February 1968 and finished in Bermuda Blue, with a blue interior, Absolute Classic Cars are delighted to offer this fantastically presented Morris Minor Traveller. Having been owned and lovingly restored by a classic car enthusiast for the last 12 years the Traveller is only being sold due to the owner having inherited something a little rarer, lucky chap!

With a history folder containing some 22 previous MOTs its wonderfully easy to imagine the journeys this delightful car has been on, there is no doubt she has been well cared for over the last 48 year and, as is evidenced by the box file of receipts, this wonderful Traveller has been subject to a much recent work, with this including:

Mechanically in great order and having traveled less than 1000 miles since her works and with her unleaded engine conversion it's a real joy to drive this Traveller. With the smallest amount of 'choke' needed on start-up the 1098cc engine starts easily and pulls sweetly through all gears and the Traveller will happily sing along down country roads.

Often a weak point on many Morris Minor rebuilds we're delighted to say the panel gaps are consistent and even around the car. Her Bermuda blue bodywork is lovely, the chrome and paint having a wonderful lustrous shine and the Travellers woodwork, is in first class order, some of the finest we've seen. On opening the door / tail-gate, the driver and passengers are met with an interior in wonderful condition with all the switches, latches and carpet having a quality feel and one can't help but smile watching the indicator stalk end 'flash' in unison with the exterior flasher lamps. Her blue interior features the correct '8 pleat' heat-pressed panel pattern seats, fitted to cars between '64-'71, she has the 'luxury' of a heater / blower and despite being relatively small by modern car standards the Traveller actually offers a good amount of interior space with a bright and airy feel, the ideal classic for young & old and ready for day trips, weekends away or just enjoying as she is.

One of the nicest Morris Minor Travellers we've ever seen, the car comes with a fantastic history file containing invoices for several £0000's, 22 previous MOT's back to 1984, her original Owners Handbook, a workshop manual and another box file containing Morris Traveller related magazines. Fully serviced and with a new MOT, this Traveller is now ready to be loved and enjoyed by her new owners.