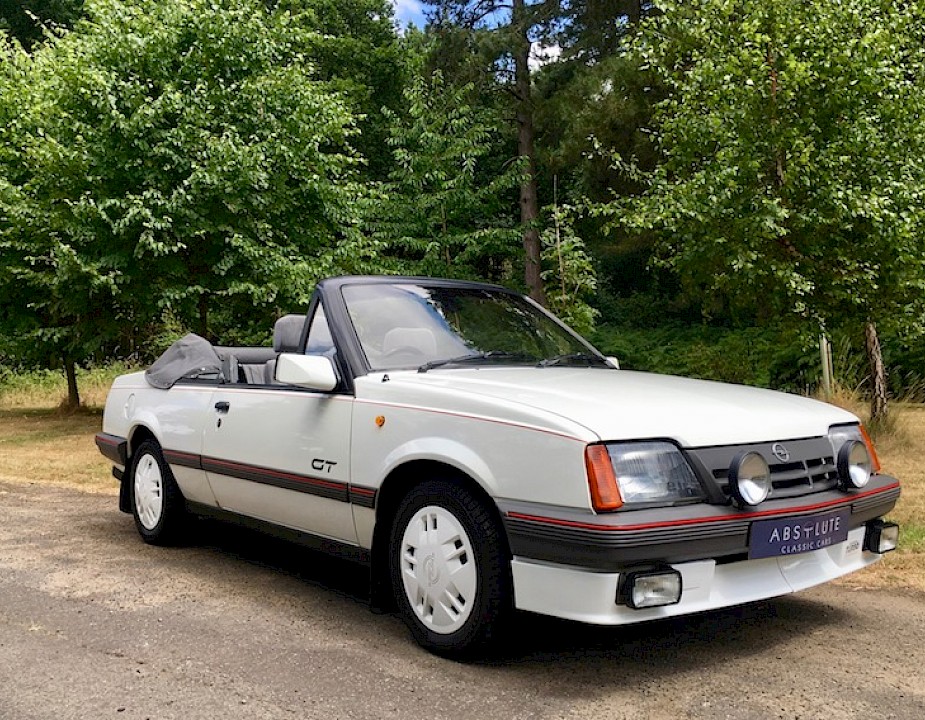 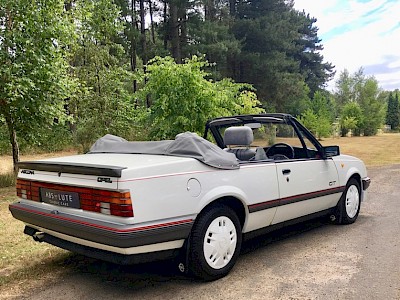 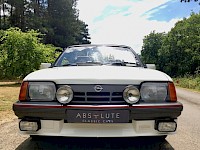 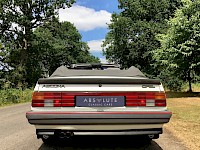 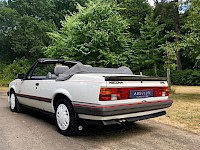 Introduced in August 1981 the Opel Ascona 'C' was first medium sized family car to be produced by the European manufacturer and formed part of the J-series platform of cars sold by the GM group from 1981-1988. Instantly recognisable in the UK as the Vauxhall Cavalier, the Ascona shared all of it's underpinnings and mechanical components with its UK counterpart and was offered in a variety of the body styles, 2 and 4 door Saloons, a 4 door hatchback, an Estate and the limited production 2 door Convertible, offered through the dealer network and built by the German coach-builder Voll under the Hammond & Thiede brand.

Of the 2873 convertibles sold by both Opel and Vauxhall, customers could specify a variety of engine and trim levels with Opel offering Luxus, GL, SR and the range topping GT where as Vauxhall only offered the convertible with the 1.8 Injection engine and primarily in SRi trim. Genuine examples are identifiable by their 'C05' stamp on their build plates, indicating that the car has been suitably prepared for conversion (thicker sill sections, cross bracing beneath the dash area etc) and once converted cars should carry an additional Voll or Hammond & Thiede build plate showing their specific commissioning number. With GM producing over 1 million examples of the Ascona / Cavalier derivatives over the 7 year production, the 2 door convertible models represent only a fraction of the total number of cars built and as such these convertible examples are now becoming an increasingly rare sight on the roads.

Absolute Classic Cars are delighted to offer this exceptional and unique Opel Ascona Convertible. Ordered and collected in person by the original and only owner, a Nottingham businessman, this remarkably car was suppled by the Peeters Opel dealership, Chaussée de Bruxelles 56, Waterloo, Belgium, where they remain today as the countrys official Opel dealership. Having been ordered in early 1986 the car was specified with the following options:

Collected from the dealership after her Pre Delivery Inspection, 21st Feb 1986, the car was brought back to the UK and amazingly was taken almost immediately, showing just 310 miles to Bill Blydenstein (ex Touring Car racer and renowned GM engine tuner) for a "A pack" cylinder head and camshaft conversion. Naturally after a suitable running in period this will have helped to liberate a few more bhp from the already sprightly 115bhp OHC engine and the car was then put into regular service taking the owner on family outings and to client meetings, where this Opel Ascona Convertible will have been the envy of business colleagues and Ford Sierra owners alike.

In 1989, now showing circa 35k miles and having been serviced 5 times by the local Sharpes Vauxhall dealership (the Ascona had now also received electric windows and central locking .. note dealer upgrades and detailed maintenance schedule) the car was taken to Courtenay Vauxhall, Norfolk where she was upgraded further with a Courtenay Turbo / Intercoooler conversion, at the cost of £2229.61, a remarkable sum when compared to standard service of £154!

A review of the comprehensive history file (the best you're likely to see) indicates that over the last 32 years this car has wanted for nothing, there are invoices for £000's all in date order, hand written service notes, MOTs all the way back to 1990, the original A5 Petters Opel Dealer wallet, original service books, plus UK (Vauxhall) service books and owners manuals.

Walking around the car it becomes immediately apparent that this car has been completely cherished, she hasn't seen the rain in over 10yrs, is supplied with an indoor cover and has only come onto the market due to the passing of the original owner. The Polar White bodywork presents fantastically well, the panel gaps remain as she left the dealership, window rubbers / glass etc are all excellent and most importantly the paint looks fantastic and her original front and rear spoilers (pre '87 cars did not have body coloured rear spoilers), GT wheel trims and original GT decals being free of any damage.

Mechanically one word springs to mind......WOW! Over the course of the 32 years of ownership the Ascona has covered less than 4k miles per year, with the majority of the mileage occurring in the first 10 years of ownership. Servicing, maintenance etc has been exemplary, with the vast majority being at Vauxhall Sharpes of Mapperley, there are bills for £0000's with this including a cylinder-head / gearbox rebuilds, replacement hood (over £2k alone), rebuilt turbo at Courtenay, replacement intercooler, a bespoke stainless exhaust, the list goes on (we've fully serviced her too, with this including cambelt and water pump) and we doubt you'll find a finer record! As a result of this the car starts on the button, not a whiff of smoke at any time, no rattles......just a wonderfully smooth drive, excellent gear changes and great power delivery, thanks in part to the Coutenay Turbo conversion. The Ascona cruises wonderfully well at motorway speeds, there's little buffeting with the roof down too and thanks to the auto gearbox and power steering the Ascona makes for a fantastic city car.

The interior too remains in great condition, the drivers seat shows no damage to the side bolsters (often a weak point), the carpets (she has an immaculate original set of over-mats too), door cards and dash are all first class and testament to his exacting care of the car the Ascona still has the original Philips DC 752 radio / cassette, plus the original stereo blanking plate. The only change to original specification is that the owner has fitted an Eclipse Anti-dazzle rear view mirror, we've never seen one of these before, a wonderfully 80's upgrade, works as it should but importantly the car still also has its original Opel rear-view mirror, along with a set of genuine GM replacement bulbs and GM headlight beam deflectors.

Built by GM at a time harking back to 'brick' mobile phones, the 'Yuppy' striving for business success and with Cameo's 'Word Up' at no1 in the charts this Opel Ascona Convertible is a very special car; just 1 owner, meticulously maintained, in wonderful condition and with her tasteful upgrades we know that you will never come across another example like this....without doubt, she is unique!