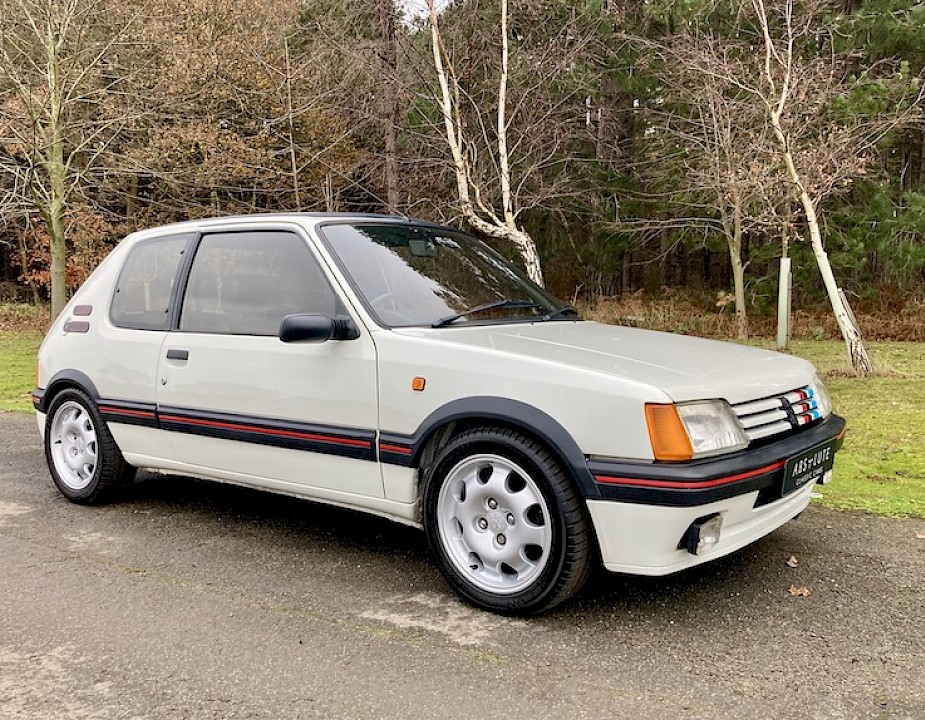 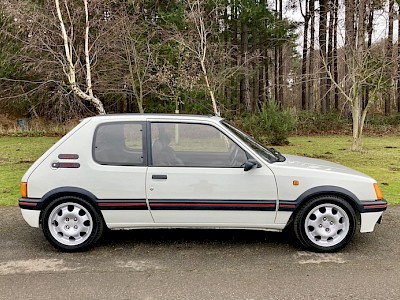 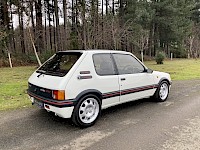 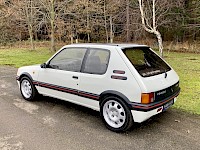 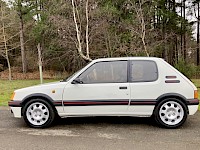 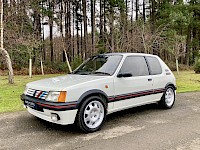 Life for the Peugeot 205 began in 1983, when it was launched as the successor to the 104 supermini. Designed in-house by Gerard Welter with interior touches done by Paul Bracq (of Mercedes Pagoda fame), the 205 was an instant success and was rightfully awarded the 1983 Car of the Year by "What Car" magazine. Seeing this success, the French manufacturer quickly realised the model also had sporting potential and a year later, in April 1984, released the 205 GTi,  powered by a 105bhp 1.6 litre fuel-injected engine and tipping the scales at less than 900kg, it could shoot from 0-62mph in 8.7sec and had a top speed of 116mph.

With manufacturers in the 1980's seeking the title for ultimate 'Hot Hatch', Peugeot revamped the 205 further in 1986 with the introduction of the GTI 1.9 and with a new torquey 130 bhp motor; the plucky Peugeot could now sprint to 60mph in just 7.8 seconds and now boasted a top speed of 127mph, C'est formidable!

This beautifully presented Peugeot 205 GTI 1.9 was originally sold through Newcastle Motors Ltd, Peugeot Main Dealer on the 8th Jan 1991 to Mrs Iris Hancock and was clearly well specified when new, with the car having the following specification:

In addition to these options the car also has the following extras:

Finished In her stunning Alpine White this 'Phase 2' 205 GTi 1.9 remains is in excellent condition, the paintwork having a great finish and its great to see that all the rubbers, side trims, wheel arch plastics and the bumpers have resisted any bleaching, suggesting she has been garaged / well maintained through her life and with the exception of the odd minor mark, none of which detract from her condition, it is remarkable to consider this GTI is now 30 years old, a great look 'hot hatch', she still wears her GTi badges with great pride, the PTS / Rallye decal to the front grill certainly adds a little extra 'va va vroom'!

Consummate with the exterior condition the interior is just as to be expected with the added benefit of no after-market speaker holes etc. The seats, as per Phase 2 cars features black 1/2 leather trim to the outer bolsters with Monaco Tweed inserts and the the fabric throughout is free from damage, with the full / firm seat bolsters showing just a few soft leather creases. The dash area remains free from any damage, those wonderful red carpets, protected by '205 GTI' mats, still look fresh and vibrant and its great that she also benefits with the with glass sliding sunroof. Walk round to the boot, the parcel shelf is devoid of, the boy-racer 6x9's, speaker holes and the boot area itself sports the 'GTI' embossed overmat too.

Mechanically this 205 GTI has obviously been cherished too. With the CAT 2 immobiliser deactivated the 1.9 litre, 8 valve engine fires without hesitation. Out on the road this GTI doesn't disappoint, with the 1.9 litre engine having plenty of low down torque (see next paragraph), meaning that she doesn't need to be revved hard to really buzz along the 'A' roads. The gearbox remains rifle sharp in its action and with her 'tweaked' suspension, dics brakes all-round she feels incredible surefooted and agile....its point and go!

Showing just 85k miles (MOT's back to '94), we have over £15k in maintenance bills (its a box file full), the car having been serviced with considered regularity throughout the years, with additional mileage / age related cambelt changes carried out as required, the last being in 2019. In 2008, circa 56k the then owner reached out to Peugeot / Talbot guru Skip Brown Cars (SBC) in the search for a few subtle modifications and with some £7500 spent on improvements the engine was been fully rebuilt to 'S' specification; so she now features a fully lightened and balanced engine with uprated camshaft, cold-air feed etc as well as other Road Speed / SBD enhanced suspension upgrades.

There will always be a debate as to who made the best 80's 'Hot Hatch', but there can be no doubting the 205 GTI 1.9 is right up there. The 205 GTI 1.9 goes that little bit further as it now offers all the enjoyment of classic car ownership with the driving dynamics and ease of ownership of a modern motor and with plenty of Gaelic flair and in such wonderful condition we really don't think you'll find a more chic classic.