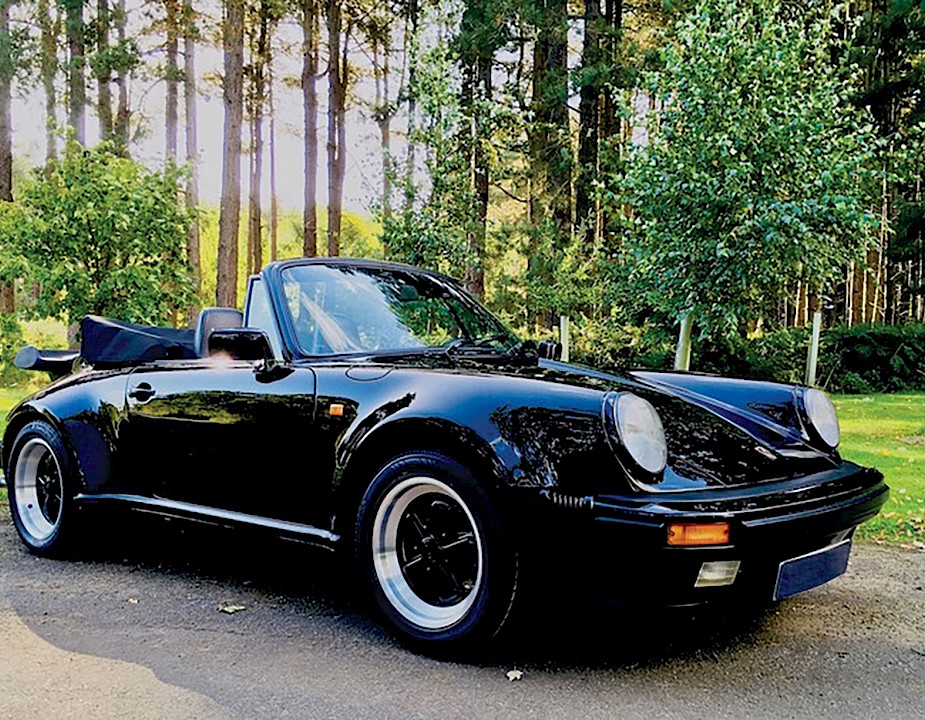 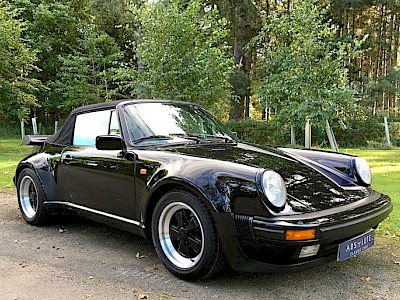 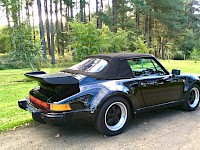 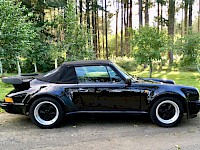 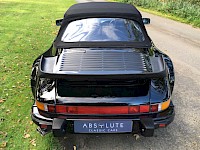 The 911 Turbo, known as 930 Turbo (930 being Porsches internal type number) went into production in 1975. The marque's first turbo-charged production car was introduced to meet Porsche's desire to lead the compeitition in FIA Group 4 & 5 motorsport, the pinnacle being to win at the 24hr Le Mans. With an intitial production run of 400 units, the Turbo shared some of its styling with the earlier competition car, the 1974 IROC / RSR and featured flared front and rear arches to accomodate larger diameter 16" Fuchs alloy wheels, a deeper front spoiler and in early cars (75-78) the 'whale-tail' rear spoiler. With some 260bhp, in early production cars, the 930 Turbo (at the time the fastest German production car) became somewhat of a legend for its outragous performace and equally for the 'lag' generated while waiting for the turbo to spool up! In 1978 Porsche revised the Turbo, engine capacity increased from 3 litres to 3.3 litres helping to reduce turbo lag, power increased too with the engine now producing 300bhp and with the introduction of an intercooler the rear spoiler was revised to the 'tea-tray' design. An alternative 'pin-up' for any petrol-head in the 80's, the 930 Turbo was the 'must have' car and production contiuned until 1989, when the original moniker for the 911 changed to 964 and subsequent use of Porsche internal type numbers.

Supplied new by Dingle Garages Ltd (Porsche franchise dealer), on the 25th Jan 1988, this specatacular 930 Turbo Cabriolet is one of only 918 examples built worldwide and represents one of only a handful of genuine UK supplied, option code C16 cars as confirmed by Porsche Cars GB Ltd. Finished in A1V9 (Schwarz) and complemented with black leather interior, the car was supplied with the following factory options:

Iconic in its style, this 930 cabriolet looks spectacular, the black bodywork, bumpers, front spoiler and the signature tea-tray rear spoiler are all free from any blemishes with the paintwork having a wonderful deep lusture which excentuates the flared arches found only on the Turbo and SuperSport models. The 16" Fuchs alloys (7J front and 9J rear) are immaculate having been professionally refurbished and are fitted with a matched set of Continental tyres, correct to the model and as with all 911/930 models of this era, on opening the front boot compartment you'll find the original space-saver tyre fitted beneath the deep-pile carpet, plus the often missing factory compressor, tool-kit, cabrio-tonneau and tonneau bag.

Sitting inside the 930, you're immediately enveloped by the heated and electrically adjustable Porsche sports seats. Teutonic in design the 930 is undoubtidly a driver focused car, the large rev counter (with the all important boost gauge) central to the instrument binacle with other instrumentation clearly giving the driver all the information needed to keep abreast of the performance of this '80's supercar. The seats, carpets, switchgear etc are all equally impressive, the driver's seat shows wear consumate to the 49k miles, with the passenger seat and rear seats showing virtually no wear at all.

Mechanically the 930 is in first class order. With 14 service stamps, Porsche Main Dealer, independant and specialist garages the car has obviously been cherished and as with many collectors examples, the car has also seen periods of inactivity. On coming into our portfolio we had no hesitation in sending the car to our trusted Porsche specialist, Zentrum in Nottingham and asked them to conduct a detailed inspection. Their findings suggested some tired components (she is 30yrs old) and so on our instruction we asked that the engine be removed, stripped and fully rebuilt, thus giving us and the new owner, complete peace of mind. As advised by Zentrum we have also upgraded the head-studs to the later 993 type, fitted stainless steel heat exchangers, a new clutch and overhauled the air-conditioning system (including replacing the condensor), fitted an R12 to R134a air-con conversion kit and then also carried our a major 24k mile service. As such, the car has since completed less than 200 miles 'running-in' and naturally we'd recommend not exploring the full 300bhp until the engine has had her 1000miles service.

A sensational example whose performance reflects Porsche's racing heritage, this 930 Turbo Cabriolet is sold with her Porsche owners wallet, service booklet, owners manual, previous MOT certificates (she will be supplied with a full 12months MOT at time of sale), receipts for work carried out (inc Nov '17 @ £13800), tool-kits etc plus two keys. With only 49k miles, Porsche 930 Turbo Cabriolets don't get much better than this. A wonderful low mileage, highly-specified example that is in outstanding condition with the added benefit of a fully refreshed engine, an opportunity not to be missed.